Seme: Excited to be studying in Cape Town 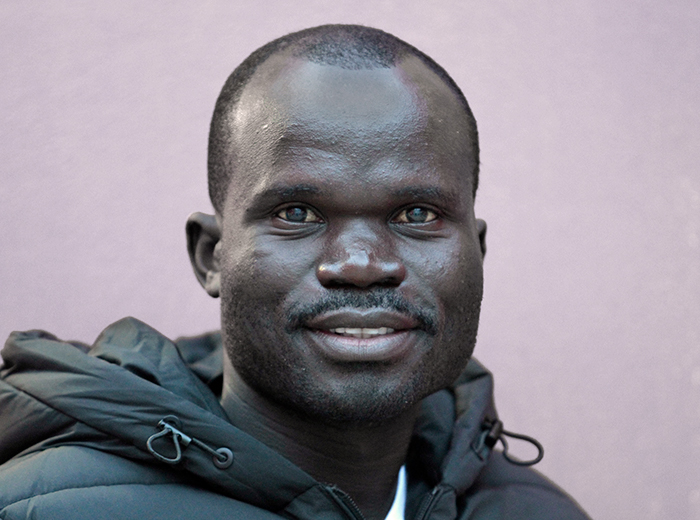 Seme is one of the CORE sponsored students from South Sudan who is currently studying his degree in South Africa. He completed his Certificate in Theology at George Whitefield College (GWC) last year and is now in his first year of his Bachelor of Theology. Once he completes his degree he will return to South Sudan to lecture at Bishop Gwynne College (BGC).

Seme was born into a Christian family, and baptised as an infant. He says that he only really understood what it meant to be a Christian later in life. On 17 November 2007 Seme heard a sermon by people doing a Missions Outreach day, and this was when he chose to give his life to Christ.

Seme was born in a small village called Payawa in South Sudan during the war. He lived in a rebel controlled area. He is one of 5 children. In 1994 his father was injured when he stepped on a landmine. His father was taken for medical help, but the family did not know where he was taken. During that time there was no means to communicate to find out this information. His family moved from one place to another, until they reached the border of Congo and settled there for almost 6 years.

His father did recover and was eventually taken to where they were. When the rebels took over Yei, Seme’s family returned to their home village. It had been difficult being near the Congo border, as there was no school nearby and his parents needed to help the teachers through farming.

Seme completed his primary school education and returned to his village in the year 2000 with the plan to do his secondary school. Things were difficult for him as his father had a disability and was not able to offer support towards his studies. His mother was working hard, but this money went towards providing food for the family.

Seme had to farm to get some money for his school fees. It took him many years to get money in order to go to school. He would often go to school for one year and then need to return home to farm, he struggled the whole way through his secondary schooling. Sometimes he would be back home for two to three years between school years. He completed his secondary school in 2011. Seme thanks God for strength to be able to complete his schooling.

After completing school he went for police training and worked for the government for 4 years. At that time he felt called to do theological training so he resigned from work and then went on to study at BGC.

Last year Seme was enrolled in his Certificate of Theology at GWC. He says that he initially struggled with doing his assignments, and often needed to consult with other people to edit his work and to assist him with siting and referencing. Completing his certificate last year has assisted in preparing him for his bachelor degree, and Seme says that he is grateful that he did this. He feels that he now has an improved understanding of the college’s expectations.

Seme’s favourite subject has been Biblical Theology. He says that he enjoys learning how God builds His salvation plan through the ages and it is fulfilled in the New Testament.

Seme enjoyed going home over the college holidays and got the opportunity to see his family members. He was also able to get involved in his church. The main pastor at his church has had bad health, so Seme assisted at the church in a lot of ways. He was given a lot of duties during this time and helped with leading and preaching. He also helped with conducting burial services and last funeral prayers.

Seme says that he feels Cape Town is a very unique place in Africa. All the South Sudanese students have mentioned that they have found the weather to be a challenge, and Seme also agrees that this change from home is challenging. He says that he notices a lot of cultural differences including the food which is very different to home as he is used to eating only pap (maize porridge) for all his meals.

He is excited about the diversity of the students at GWC. Seme says that this is his first time being part of a community where people come from different countries and tribes, and are all staying together.

Seme is making use of his free time in Cape Town by exploring the nature in the city. He enjoys hiking, and has been up Table Mountain multiple times already, and also hiked to Cape Point. Seme is also getting involved in social groups at the college.

The residence that he is staying in is near the college, which is also very close to a beach. He is living in a very small and friendly community. He says that when he is walking around the area everyone greets each other- whether you know them or not. This is not common in South Sudan, you don’t normally greet strangers when you walk passed them in the streets.

PrevPreviousPhilip: from being born during the war to starting his degree
NextPhilip shares about some of his tribe’s cultural practicesNext